In order to ensure that our website runs as fast and efficiently as possible, we often use performance analysis tools to take a look at what is happening inside the browser, specifically on more constrained devices such as Mobile Phones. It was during one of these profiling sessions that we realised that the JavaScript emitted by the TypeScript compiler had the potential to be optimised so that the output used CPU and Memory more efficiently.

While investigating this we devised a TypeScript design pattern for properties of classes called the Static Initialisation Pattern. This article discusses this pattern, how it was devised and the benefits it delivers.

So what does the Static Initialisation Pattern (also known as Static Init, or SInit for short) look like?

Lets break this down:

This is a TypeScript class with a property which we wish to have a default value.

Rather than specifying the default value in the property declaration, we add instead a protected static member called SInit, which forces the evaluation of a closure which adds the property to the class prototype with a default value. SInit is declared as static so that it is evaluated at class declaration time and is attached to the class definition, rather than any instances. It is declared as protected so that any derived classes can also declare their own SInit without causing a compilation error.

If there are more than one property with a default value, the class would look like:

In order to understand why we would use this pattern, lets take a look at how default values work in TypeScript.

If you give properties a default value within the class body using idiomatic TypeScript it will initialise them in the constructor each the time the class is instantiated.

This results in the JavaScript runtime needing to dynamically create and attach properties and assign values each time that the object is created. If there are a large number of properties, and you intend to create a large number of instances of the class, then this will have a significant impact on performance.

Using the Static Init Pattern, the property is initialised on the prototype only once when the script is loaded, resulting in a more lightweight constructor.

Therefore we settled on the convention of the protected static member called SInit.

Within the contents of the closure the pattern relies on the JavaScript concept of prototypal inheritance to ensure that the properties are created with default values on each instance, without the need to set the default value separately on every object instance each time it is created.

In order to prove that the pattern really did improve performance, we benchmarked the two different sets of JavaScript code and compared the results.

Here are some actual test results from Chrome 60:

In these tests, a higher number is better as the test was able to perform more operations per second. 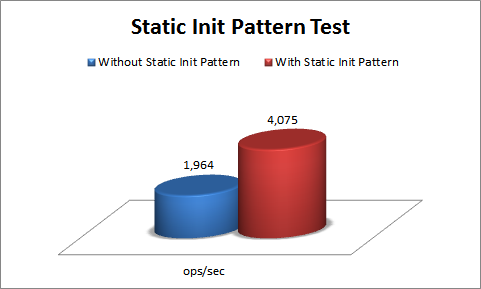 As the chart indicates, we see a performance gain from 10% to 100% with this approach across all the major browsers. Don’t take my word for it though – please feel free to test this yourself using this Performance Benchmark.

Using the Static Init Pattern declares the shape of the prototype definition to the runtime before instances of the object are created, meaning that new instances are declared in a single contiguous block of memory, resulting in more efficient heap usage.

Without the use of this pattern, the different properties of an instance would be allocated in different areas of memory, resulting in slower reads and writes and more memory fragmentation.

In a typical JavaScript Runtime Environment, JavaScript Objects have a model similar to the following diagram: 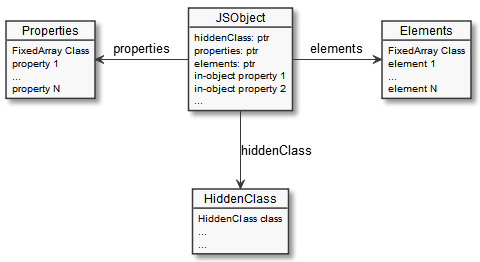 The article Fast Properties in V8 discusses this in further detail for the V8 engine used in Google Chrome.

The Static Init Pattern does result in slightly larger classes than if it is not used. We found this as an acceptable trade-off as once the output has been minified, combined and gzipped the size increase was negligible.

It also results in an empty property SInit existing on the Class definition (not instances). We have not found this to be an issue.

When using the Static Init Pattern, it is important to remember that property values initialised on the prototype are shared across all instances of the object. This is fine when the value is a simple type or constant value, but can cause issues if it is an instance of an object or an array as this effectively becomes a static reference across all objects without being explicitly stated as such. Recommended primitive values would be numbers, null, strings and booleans.

Use of the Static Initialisation Pattern has resulted in a significant performance increase in our usage scenarios, both in terms of efficient CPU and Memory usage. This results in a faster, better performing experience for our users.